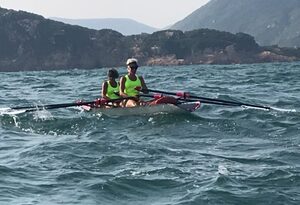 Rough sea high swells
My racing partner had her gate jumping open ( straight after a good start) and 1 of her rails moved forward very unfortunate and with all the water in the boat not possible to open the bung and adjust she was not able to hit the rails back and moved her footplate totally to the end to be able to move.

One week after competing in the Coastal Rowing World Championship, our iron ladies Tess and Rachel were again in action competing in the ATIR’s 45 km challenge. They were the only Women’s double that dared to enter this race. What they have accomplished is simply EPIC. If you have the patience to read until the end you will understand. It is difficult for me to write objectively, as most of you know that I train with them, I advise them (I’m not their coach) and most of all I’m their friend. But because of this, you will understand why I’m so proud of them.

They started strongly, setting a comfortable pace and went flying through the first part of the race. Unfortunately, around 1/3 of the race their boat suffered a very serious equipment failure, as the left rails of Rachel’s seat became loose and slid forward by 20 cm. To make matters worse, this equipment failure happened when they were entering the big swells of the East side of HK.
For our non-rowing friends, imagine running a marathon and as you are about to enter a steep hill, one of your shoe’s loses its laces and you lose the feeling for your stride. Then imagine that you still have 30 km to go!

From the support boat I could see all the pain and frustration in Tess and Rachel’s faces; for the time lost trying to fix the problem and the time lost rowing at an uncomfortable pace, bad set up, poor rhythm. But I didn’t see defeat in their eyes… when the going gets tough, the tough gets rowing!

They kept on going, slowly adapting their stroke to the new “set-up” or “rigging” and they started to find again their rhythm. Strokes were shorter, but they were together and their split times started to reduce again. You could even see a smile every now and then.
After Aberdeen, they were joined by the fresh crews that had opted for the relay option and started at Middle Island. And guess what? The new comers were not pulling away as you would have expected from a fresh crew (I’m talking about men C4X+). Oh, back in the game then!

Once Victoria harbour was reached, where the waters were super challenging with waves arriving from all sides, ferries crossing frequently and a strong head wind, I could see their determination to finish strong. When I was suggesting the line, I could sense a very slight nod by Tess as to tell me… “we got this”. These waves were not going to stop them.

As if all of this was not epic enough, something extraordinary happened. At about 1500 m. from the finish line Tess turns back to check the line and sees a men’s quad ahead of them.
And, bloody hell, at the next stroke she starts counting… And Rachel smiled…
Suddenly their boat begun to accelerate! They wanted to overtake the quad, they wanted to defend their position from the attack of a second men’s quad that was closing on! And they sprinted!!! One- two- three… One-twoooo- Three… they reached the quad ahead, and stroke after stroke they pulled away… Can you imagine doing a sprint after you have already rowed 42 Km and in the conditions they had to row in? Richard and I stepped in with the counting, shouting at the top of our lungs. I gave them the “30 more-strokes” signal. They knew I was lying and they smiled. After 100 strokes they reached the finish line. They have done it!

Did I mention that Tess raced with an injured foot?

Friends, this is the essence of rowing! You commit to yourself and to your partners. You overcome adversities, you adapt. You give your 100% knowing that your crew will do the same. And if your hands are bleeding, your lungs are bursting you just keep going reassured by the fact that your crew members, if they could, they would take your pain and you’ll do the same for them.
Thank you Tess and Rachel!